After seeing successes at the end of 2021, today the Stop Cambo team launched their campaign to stop the Jackdaw gas field. Located 155 miles off the coast of Aberdeen, the UK government is currently considering approval for Jackdaw, which is 100% owned and operated by Shell.

Here’s what you need to know about #StopJackdaw.

Jackdaw is one of the top ten biggest gas fields left in the North Sea, at ten times the size of the Abigail oil field that was approved in January. It’s also the 16th largest field by remaining resources; its gas reserves, which were discovered 17 years ago, are estimated at 58 million barrels of oil equivalent. Burning the gas from Jackdaw would create 50% of the annual emissions of Scotland, or more than the annual emissions of Ghana, in a stark demonstration of how responsibility for the climate crisis does not fall equally across all countries.

Jackdaw is a high-pressure, high-temperature (HPHT) gas condensate field and its gas reserves have a high CO2 content. Both factors make it a technically challenging, expensive and particularly polluting field to develop. Shell’s proposals for Jackdaw involve first ‘cleaning’ its high emission gas through a special process, an offshore amine unit, which extracts CO2 from the gas so it meets export pipeline specifications. Shell says it will then reduce emissions further by electrifying a facility 20 miles away, a hub it already owns called Shearwater, to which the gas will be fed from a new (and predominantly unmanned) installation at Jackdaw itself.

These proposals were originally rejected outright by the regulator, OPRED, because of the high emissions resulting from producing Jackdaw’s gas, which weren’t in line with the industry’s plan for reducing its climate impact. First, the process for ‘cleaning’ the high CO2 gas (the amine unit) is itself highly emissions-intensive, as Shell will directly vent CO2 into the atmosphere. Second, the proposed electrification of the Shearwater hub would not significantly lower emissions according to OPRED because it would not impact the emissions vented from the amine unit. OPRED also notes that Shell has only mooted, but not yet committed to electrifying its Shearwater hub, and that its plans remain uncertain.

In early 2022 Shell slightly tweaked their plans and resubmitted proposals to develop Jackdaw for approval. Shell has only made minor changes to the Environmental Statement while restating its argument for its proposed concept without changing the overall project philosophy, proving that their commercial interests are Shell’s main priority. The proposals for Jackdaw are now out for consultation until April 18th. If approved over the next few months, this field could help set off a new wave of oil and gas extraction.

Additionally, the IPCC report released last week echoed the call from the International Energy Agency: we can have no new oil and gas expansion if we want to make our very narrow window to limit warming to 1.5C

Shell and the oil and gas industry argue that Jackdaw will benefit UK energy security, but this isn’t true.

Jackdaw will only intensify the climate crisis, as its gas is particularly polluting due to its naturally high CO2 content. If approved, Jackdaw would see the UK prioritising a relatively minor source of gas, which could be sold overseas, over its legal duty to reduce its emissions under its Net Zero strategy. 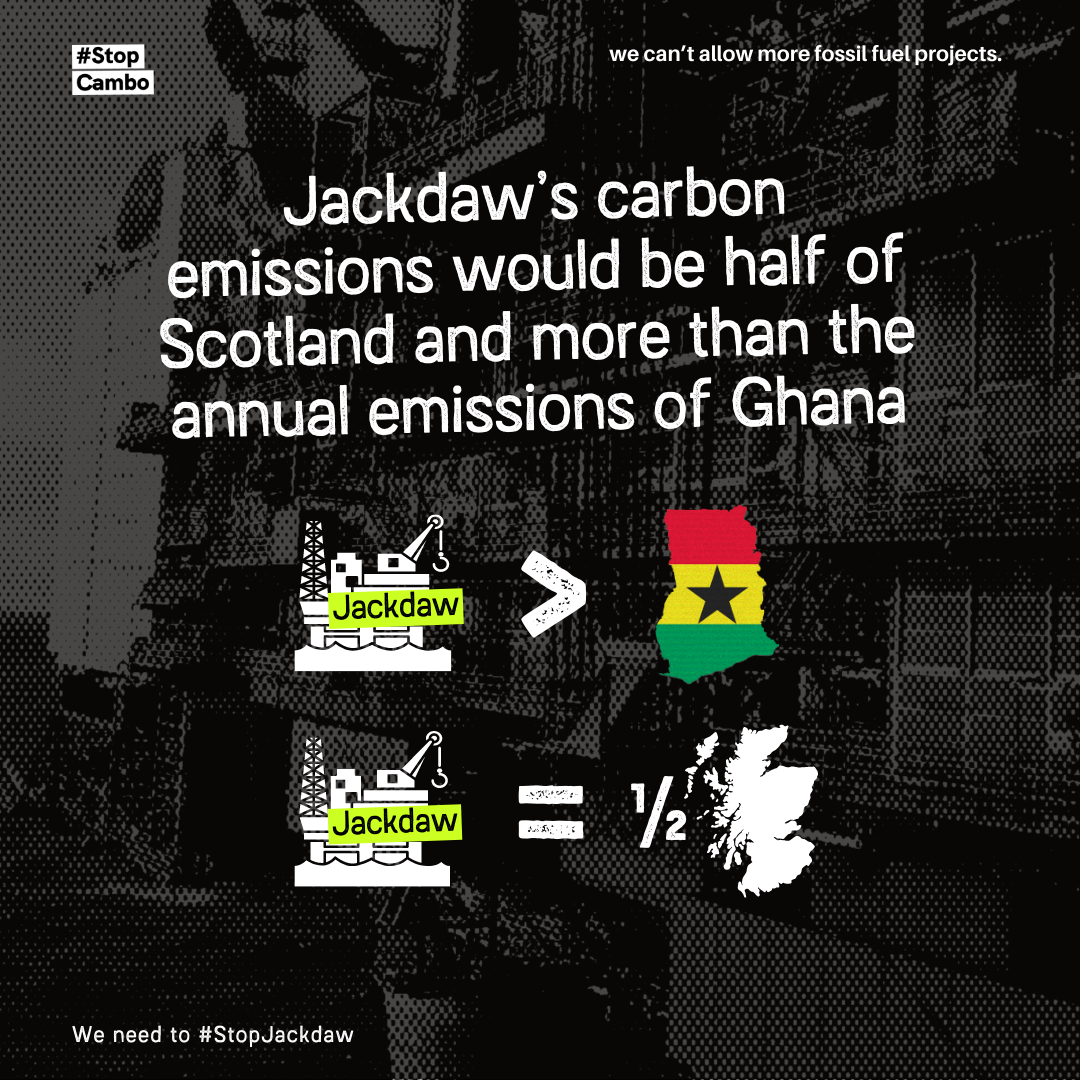 Jackdaw will also do nothing to lower UK household energy bills or provide a more reliable energy supply. At its peak, Jackdaw’s output would only meet between 1 and 2% of UK gas demand. This also won’t be for another four more years in 2026, and production will drop by almost 60% within three years.

Plus, because the gas is owned by Shell, they can choose to sell it overseas for a better price. Towards the end of last year, just as we entered the gas crisis, the UK exported unusually large amounts of gas for the time of year because the companies that own it could get a better price elsewhere. Exports in October 2021 were the highest for that month for a decade, and Shell recently announced a record £14.2 billion in profit during the energy and cost of living crisis across the UK.

People in the UK want an affordable energy supply that doesn’t put our climate at risk, the government is failing on both counts if it keeps approving new fields like Jackdaw.

Right now, most of us are locked into using fossil fuels and forced to pay extortionate heating and fuel bills, all the while knowing that the UK has the best renewable resources in Europe that could supply us with affordable, less polluting energy.

The shift away from fossil fuels is being delayed by energy companies’ desire to continue to profit from oil and gas, and our government is failing to stand up to them. All new fields will do is make more money for oil and gas companies, who are profiteering while causing the climate crisis. Shell won’t stop until the UK government stops them: while the world is racing to lower emissions and we struggle to pay our energy bills, Shell wants to profit while worsening the climate crisis. Shell may be headquartered in the UK but, in 2020, the UK was the only country where Shell operated that it didn’t pay any tax. In fact, it collected almost £100m from the UK government. In 2021, the same year we saw record gas prices and high oil prices, Shell collected more than $120 million from the UK. 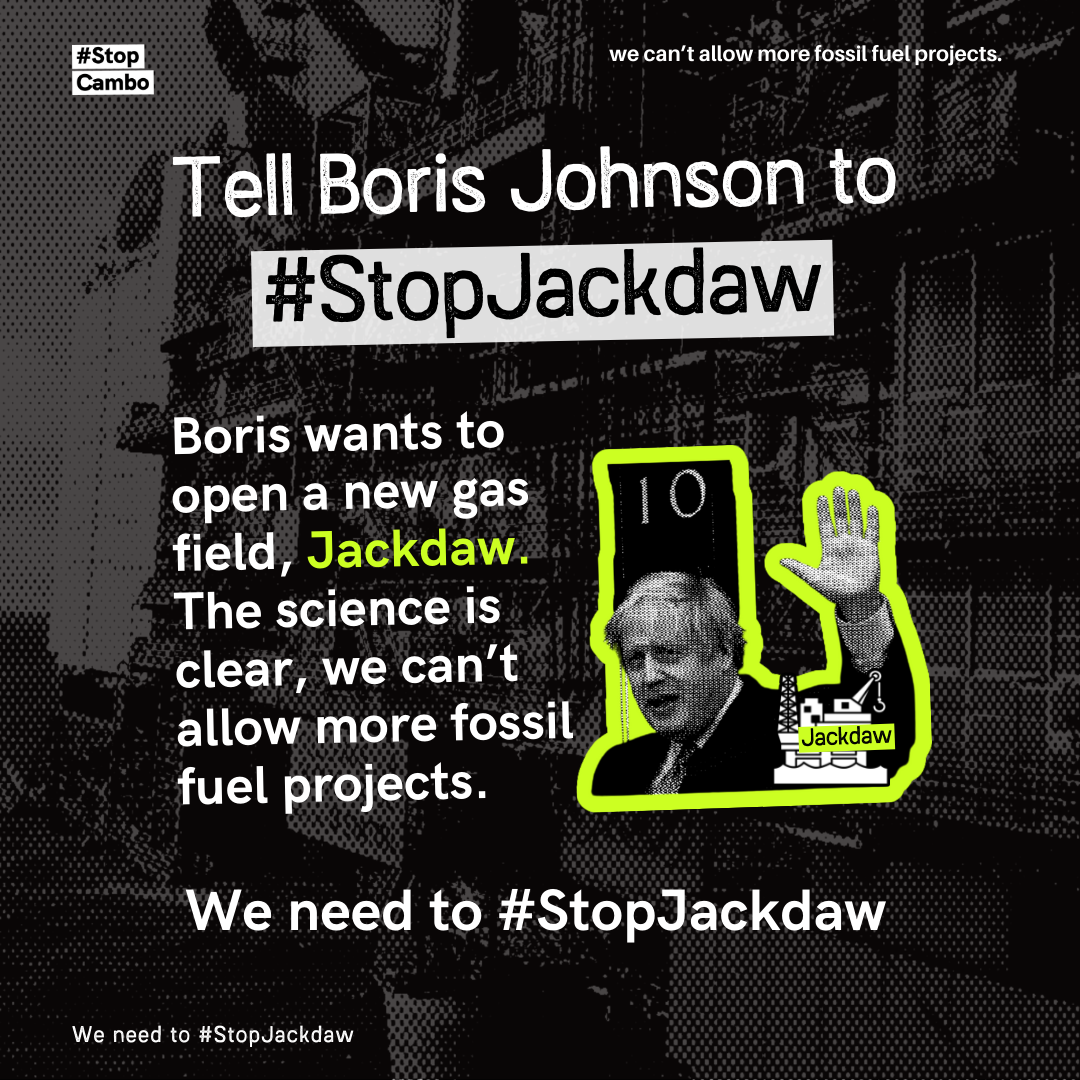 We need a just and fast transition away from oil and gas. Every new field delays this transition to a more affordable, renewable energy system. A just transition should be led by oil and gas workers, their unions and impacted communities – not the oil and gas executives that have delayed real action for decades. Done properly, with the right support and investment, the move away from fossil fuels could see three jobs in clean energy for every oil and gas job at risk. Only those currently raking in oil and gas profits would lose.

How to get involved and #StopJackdaw

Friends of the Earth Scotland, 350.org and Stop Cambo have set up mirrored petitions on the UK government to stop Jackdaw, stop all new oil and gas extraction and secure a just transition for workers.

A consultation on the environmental impact of Jackdaw is currently open until April 18th.

A coalition of groups have created a technical response to the consultation and would love other organisations to sign up as co-signatories. Getting as many groups as possible to object to Jackdaw field during the consultation phase is crucial to add weight to campaigners’ objections and scrutiny of the project.

If you are involved in any group that wants to sign onto the group response, email fiona@upliftuk.org by Midday April 14th.

As a group, Stop Cambo will be focusing on the #StopJackdaw campaign (seeing as the Cambo oil field is currently still paused).

Join us to help create change