When I first wrote about chocolate back in January I wasn’t quite prepared for the reaction. The piece was widely shared, and I got a lot of messages thanking me for writing it, which was both totally unexpected and really encouraging. Like many things we consume, it’s easy to take chocolate for granted as it just shows up, packaged and ready to eat, in our local shop. We often don’t think about the raw ingredients, the process, or the people involved in its creation.

That changed significantly for me since writing about chocolate (and learning a whole lot myself). Beyond making sure I’m sourcing mine ethically I also found myself frequently wondering how many individuals went into its creation and what each of their roles was. How exactly chocolate becomes the tasty thing in front of me. Luckily I got the chance to get even more more insight recently, as I went to make chocolate with Rio Nuevo in their workshop!

Fun fact, this post isn’t sponsored at all, I actually met Sara and Andreas, the couple behind Rio Nuevo, in a totally different context when I first moved to Cornwall. I only found out later that not only did they run a chocolate business, it was an ethical and sustainable chocolate business too. The briefest mention of coming into the workshop to learn how chocolate is made, and of course I was in there as fast as possible. But first, a little more on them. 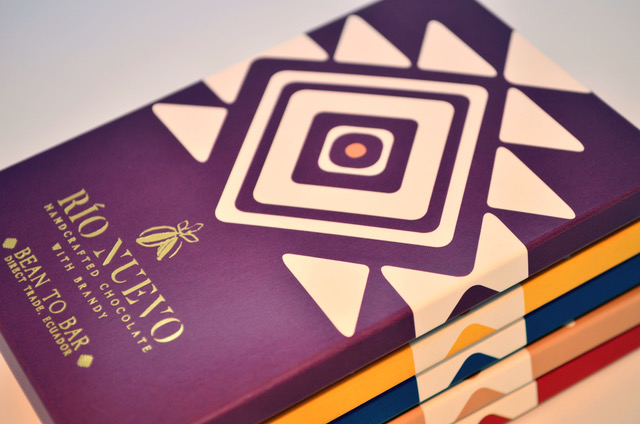 When it comes to sourcing sustainable chocolate, the thing I always tell people is to find the shortest supply chain possible, as there’s less chance of exploitation creeping in. Rio Nuevo are passionate about developing sustainable livelihoods for cocoa farming communities, and they achieve this through being a direct trade, single estate, bean to bar company. This means that they buy from and work directly with the farm where their cacao is grown, ensuring farmers get a fair price and that all working conditions are ethical, their cacao is only grown in one location (aka a single estate), and that they make the chocolate themselves from scratch, starting from the cacao beans.

Sara grew up on a small coffee farm in Colombia, so had first hand knowledge of the difficulties small scale farmers face, and Andreas grew up in Ecuador, where all of Rio Nuevo’s cacao beans are grown. Their project was born when they decided to get married in the Amazon rainforest in Ecuador. Whilst there, the local residents showed them how to make chocolate, and they learned about both the struggles Ecuadorian cacao farmers face and the propagation of CCN-51 (a hybrid variety of cacao which has a higher yield but lower quality) which threatens Ecuador’s cacao heritage. They returned to the UK wanting to do something, and decided to make chocolate that could look after the land and its farmers, as well as raising awareness of the problems and limitations of fair trade practices in the cacao industry.

Rio Nuevo buy and import their cacao directly from a small farm in Vinces, Ecuador. This farm is owned and run by Don Julian and Doña Julia, alongside their daughter and grandchildren, and has been in their family for generations. Many of these small holder farmers lack access to basic tools, trade markets and knowledge, so by working directly with their farmers Rio Nuevo are able to empower and support them. Their partnership helps the farm be more productive, improving living conditions and their environment through proper management, and helps grow healthy community and thriving economy in the area. There are many others like Don Julian and Doña Julia, around one hundred thousand families depend on cacao crops. Because of this Rio Nuevo take their core values of transparency, responsibility and integrity very seriously, as their long term hope is to see farmers lives improve throughout the industry.

It also turns out that Ecuador is the leading global producer of Arriba Nacional, a fine flavour cacao variety known as ‘the finest chocolate in the world’. Only 6-8% of cacao produced worldwide is fine flavour cacao, and 54% of that is produced in Ecuador. Rio Nuevo import these beans directly to Cornwall (they work so directly with their farm that they even worked together to fill in all the paperwork and sort the legal side of importing from Ecuador to Cornwall), where they then go through the entire process of making beans become bars. This is also where I got to join in.

And let me tell you, their chocolate is really good. 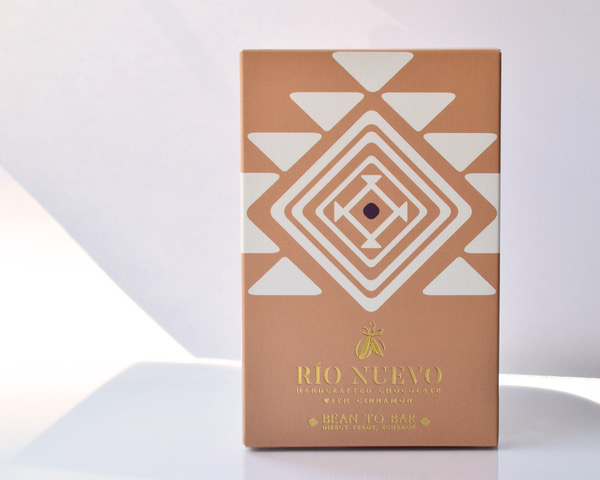 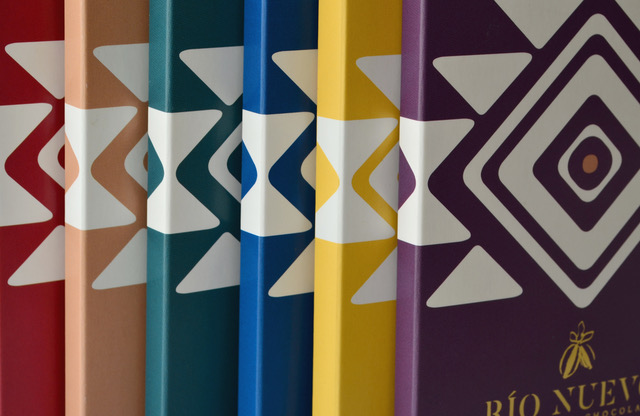 When we first arrived at the workshop we were treated to a tour of the space, including the storage area for the unroasted cacao beans. The smell was incredible, overpowering, and definitely not the chocolatey goodness I was used to. However the first step in the process is to roast the beans between 120°C and 160°C, which allows them to develop their typical roasted cocoa aroma and darker brown colour. This is also when the shells come loose and separate from the cacao nibs.

After the beans have cooled down they are ready for the next steps. They are passed through a winnower which separates nibs from husk; Rio Nuevo’s is extra special as they built it themselves with materials they had to hand and some serious innovation. There’s a specific technique and speed with which to feed beans through a winnower to avoid waste or losing too much of the bean, which I turned out to not be so great at, however my boyfriend was a natural so we left him to it. Beans are weighed before and after winnowing so that Rio Nuevo can see how much is lost and work to improve it (hooray for sustainable companies fighting food waste), and boyfriend’s skills were so good that it was the smallest amount they’d ever lost! Good job boyfriend. 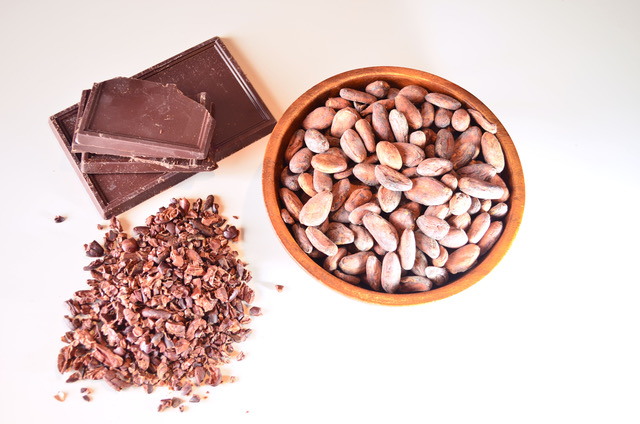 Even after winnowing, to ensure quality control the nibs are then checked by hand, making sure any husk that slipped through is removed. This is where I joined in, as Sara and I worked through nibs to ensure their chocolate would be as smooth and high quality as possible. I wasn’t the fastest, but I was very diligent, and there was definitely something oddly satisfying about this level of quality control. It was at this point that I knew I would never begrudge the higher prices of ethical chocolate again. When you’re in the workshop, sorting through each cacao nib with your own hands, you understand just how much difference that extra money means, and the better quality it provides. As we sifted through tiny fragments of husk, Sara telling me more about their background, their passion for farmers and using chocolate as a business for positive change, the more I fully understood just why this type of chocolate is different. Not just because it’s higher quality and better taste wise, not just because they look after their farmers and pay them properly, but because each step of the process is so infused with care, consideration and passion. From the bean all the way to the bar.

After this step the cacao nibs are ground using granite rollers , creating cocoa liquor. At this point unrefined cane sugar is added and any other flavours like cinnamon (so yes, this chocolate is vegan friendly, it’s literally just cacao and sugar at its core). The liquid is then conched, aka mixed for a long period of time, which balances aromas, refines flavour, and makes the chocolate even smoother. It’s then ready for tempering.

Tempering refers to cooling chocolate in controlled temperatures, which gives it the glossiest shine, the perfect snap and the right texture, before it is poured into moulds that Rio Nuevo have designed specifically, and allowed to set. 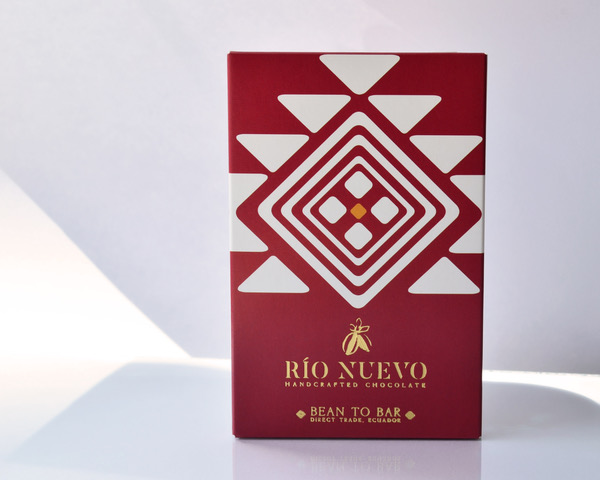 Currently, Rio Nuevo are experimenting with the introduction of different flavours, so when we were with them we had a go at adding a few different options for coffee flavoured chocolate. One was coffee infused cocoa butter, and one was coffee beans added directly, both added at the conching process. Sara and Andreas had to return three days later to see how the flavours turned out. So even in this, the introduction of new flavours, there’s no huge marketing team trying to figure out what trend to exploit, or what will sell best. It’s all about passion, experimentation and fun, finding something that people will actually like and enjoy, not just the easiest thing to sell. It’s a stark but solid example of the differences you find in a small business.

Beyond learning the full process of making chocolate, and seeing exactly how a bean to bar company goes from, well, bean to bar, my time with Rio Nuevo also opened my eyes up to just why these companies are so valuable. Yes it can feel frustrating to spend more than that big brand cheap chocolate, but did you consider that perhaps your anchoring bias for the price is off? After spending time in a chocolate workshop, seeing every step of the process and getting in there myself to help, I now have a much fuller understanding of the value, the process, and the importance of supporting small sustainable businesses like Rio Nuevo. Yes, the taste is so much better, but you’re also funding real passion and dedication to craft that just can’t be replicated by huge factories full of machines. And that’s a world of business that I’m happy to support. 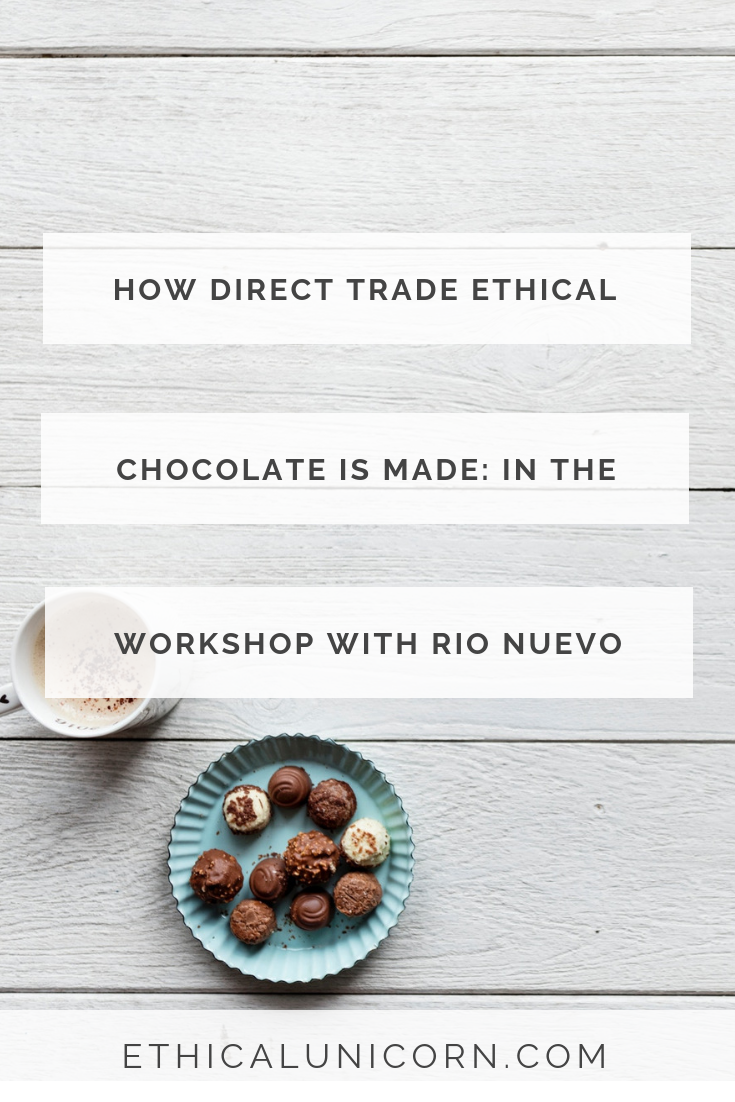