More and more these days I’ve been seeing products made from recycled ocean plastic, has anyone else noticed the same thing? It goes without saying that this is great, anything that gets plastic out of the ocean is important. but have you ever wondered how exactly one fishes a plastic bottle out of the sea makes it into a new product? Me too. Recently I chatted with Waste Free Oceans, a Belgium based foundation that works to physically collect floating marine litter and partners with brands to give it a new life, to learn a little more about what the process actually looks like.

Plastic debris in the ocean is an issue that zero wasters and environmentalists have been concerned about for a long time. More recently the conversation has made its way into global consciousness as concern grows over this serious issue; with densities up to 580,000 pieces per square km documented, and high concentrations found particularly along the coastal margins near plastic sources and in convergence zones.

‘As global plastic production is increasing exponentially, doubling roughly every 11 years, between 2016 and 2026, humans will make as much plastic as has been manufactured between the 1950s and 2016.’

I know, plastic production is the worst. Ugh.

Although plastics originating from land-based sources make up most of the marine debris in the oceans, there are also some sea-based types of plastic debris that can also have significant impacts on marine habitats. Luckily Waste Free Oceans have developed a creative and innovative answer to the issue. Using “trash catchers” that can be attached to fishing boats, they collect ocean plastic floating on the water’s surface and then collaborate with other companies to transform the collected waste into new products.

Where is the ocean waste collected?

Material litter hotspots, aka areas with significant ocean waste densities, are identified by local partners, with previous collection sites including Barcelona, Porto, Rio de Janeiro and Cotes d’Armor. Waste Free Oceans collaborates with fishermen to collect waste because they are already present in the fishing areas all year, and play a major role in environmental surveillance of in their region. Their familiarity with local water conditions as well as necessary technical knowledge and tools such as vessels make them an ideal fit as WFO partners. 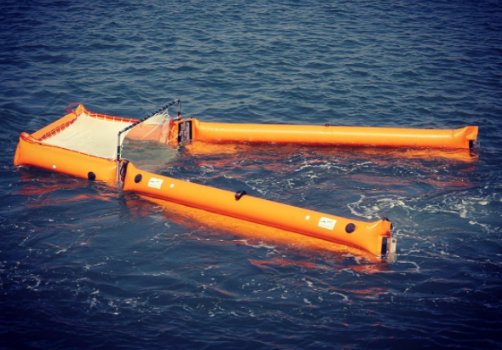 These trawls, developed and patented by a former fisherman who received the Legion D’Honneur by the French Government for his role in cleaning up oil spills, have been successfully deployed and adopted by numerous governments as the leading tools to respond to major maritime and river pollution incidents.

The ‘Trash Catcher’ can be either towed by boats of varying sizes or, if the body of water is a river, can be statically placed within the body of water, where it can rest unmanned until the net needs to be emptied. The collection trawl will be brought to the site and local partners are trained on how to use it: installation, waste collection and removal of trawl from the water with the use of a crane.

In developing the “Trash Catcher” care has also been given to ensuring that only floating litter is fished for and to minimise the extent to which aquatic life will be caught or otherwise adversely affected. The Thomsea trawl net extends only 70 cm into the water column (with the rest supported above the water line) to facilitate environmental care.

When it comes to fuel consumption special trips for the collection and recovery of marine litter only take place in predefined hotspots of ocean debris. In this way fishermen avoid excess consumption of fuel in the search for marine litter, optimising the efficiency and environmental friendliness of the trawl collection system. Additionally, fishing vessels operating the trawls operate at very slow speeds with an average of 6 knots per hour. Waste Free Ocean’s intention is to distribute the technology in coastal regions with accumulating waste in hotspots around the world — coastal cities, waste-polluted rivers and regions with high inflow of leaked waste. In this they intend to cooperate with local municipalities, NGOs and business.

Transforming the trash into sustainable products

Waste Free Oceans collaborates with small and large brands that are interested in using collected trash to create products with ocean plastic content. Collected trash is sent to a local recycler for sorting, cleaning and turning into polymer pellets. Converters then combine these pellets with other polymers to creates a new product, and the partner brand develops the final product to bring to market.

Waste Free Oceans say there has been a growing interest by brands, and I’m not surprised. Whether its pre-existing companies or sustainable start ups, it’s clear that the demand is growing for solutions that get plastic out of our oceans. It’s so exciting to hear the very practical steps taken by organisations such as Waste Free Oceans. Whilst I hope one day they won’t be needed because all the plastic is sorted properly (sorry that I’m wishing you all to be out of a job WFO team!), until that day comes, I’ll be supporting initiatives like this in order to do all that we can.